This is a 3D printed 1:27 scale model designed based on SpaceX’s Crew Dragon spacecraft.

“The Dragon spacecraft is capable of carrying up to 7 passengers to and from Earth orbit, and beyond. It is the only spacecraft currently flying that is capable of returning significant amounts of cargo to Earth, and is the first private spacecraft to take humans to the space station” – source: SpaceX

We designed this model to celebrate the Demo-2 mission. We hope it can be used not only to inspire more children to become astronauts in the future, but also to pursue STEM careers when they grow up.

Want an even bigger & more detailed version of this model? Check out our DRAGON-MJ 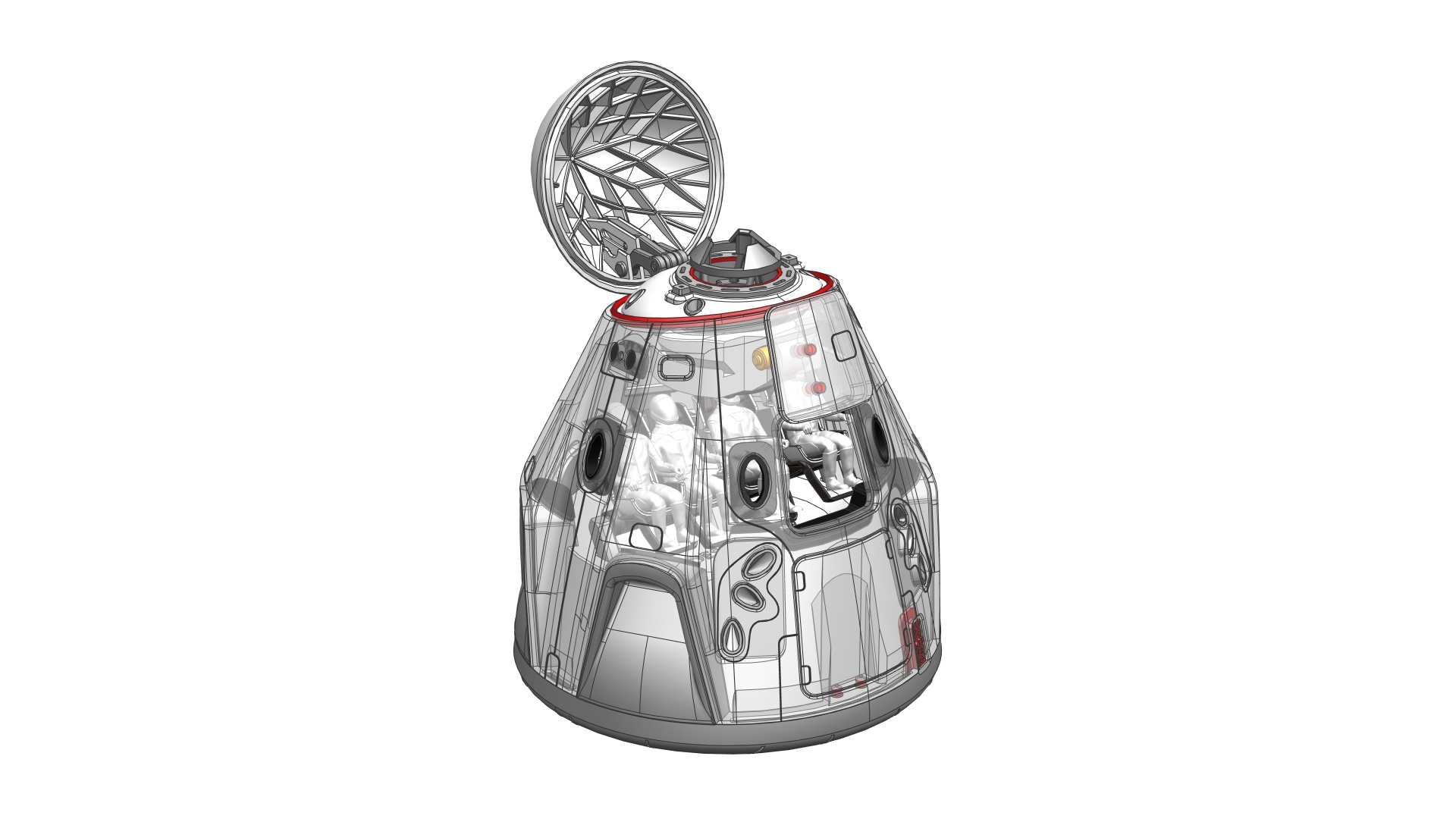 If you want to print this model yourself, your printer need a minimum build volume of 156x156x150mm

In-depth tutorial on printing and assembling this model: “How To Print & Assemble The DRAGON-MS”.

How was this model designed?

This model was designed using publicly available material from the internet including CAD models, videos and pictures of the real SpaceX’s Crew Dragon spacecraft. See list below for more details:

Pressurised Crew Section
The pressurised crew section was designed based on the existing Draco Pod model by Prot0typ1cal (see LINK). He has done a fantastic job modelling the outer body of the spacecraft so I used his model (with his permission) as reference and added my personal touches. I re-designed almost every part of the original model so they can be fitted together without having to use super glue. Instead, most parts are held together either by magnets or just friction between them. This has allowed my model to be fully stripped down and rebuilt as many time as required. Only a very small number of parts are glued together (e.g. the Monitor and Monitor Stand).

Astronauts in SpaceX ‘s Suit
I came across the SpaceX Astronant model, designed by Gil P. de Paulo on GrabCAD (see LINK) and I think it would be a really nice touch to print this model at the right scale and put it next to the spacecraft model. This would definitely help people (including myself) to understand the true scale of the real SpaceX’s Crew Dragon spacecraft in reality (as many of us don’t have the luxury to see it with our own naked eyes). Credits also go to Trevor Page from Tesla Owners Online for modifying the original standing astronaut design to seated astronaut for this MJ model. If you would like to subscribe to his YouTube channel, please click on this LINK

Interior
I wanted to add some interior to this model as well, rather than just the outer body, therefore, I decided to give it a go. The interior of the model comprises of a ‘giant’ monitor, which is fixed to the ‘floor’ via a stand. On the real spacecraft, the monitor is actually mounted to the ceiling. However, as I wanted to show this feature once the outer body panel is removed, I decided to fix it to the ‘floor’ instead of the ceiling.
There are 4 seats in total in this model, each seat can be adjusted separately (incline/recline and spin around the x-axis) as I tried to replicate their movement as per the real ones (e.g. the seats are lowered and facing the entry hatch when the spacecraft is on the ground to help astronauts get in/out with ease. Before lift-off, these seats are tilted backward and also raised upwards closer to the monitor).

Unpressurised Cargo Section (aka. Trunk)
I designed the Trunk (unpressurised cargo section) from scratch based on the photos/videos of the spacecraft available on the SpaceX’s website (see LINK). I tried to replicate the exterior of the Trunk as much as I can, including the number of radiators, solar panels and their locations around the Trunk. I also added my personal touch by designing a secret compartment hidden inside the Trunk. From the outside, the Trunk looks like it was printed as a solid block – however, if you spin the bottom of the Trunk slightly to disengage its simple locking mechanism, the bottom part of the Trunk will slide out very smoothly, revealing its secret compartment – where you can keep some of your precious treasure inside. The other way to open the Trunk is to use the magnets on the bottom of the Heat Shield of the Pressurised Crew Section (for more detail – see assembly instructions below)

What are the differences between the DRAGON-MS and DRAGON-M3 Version?

The DRAGON-MS model has a ton of additional/upgrade features that aren’t available on the DRAGON-M3 model, which are:

Unboxing and building this model: “Unboxing the DRAGON-MS”.

Love the work. When are you going to put it into production?
When will you have the whole rocket kit.
I would love the whole model to build.
Putting the engines together to the fule system to the dragon capsule.

An (the designer and 3-D-masterhead :)) has done such an incredible good job and sended me the MS-Dragon-Capsule in 1:27-scale at a real high quality. The model is so well printed (of course there just is a little grinding necessary at a few spots, but that even raises the joy :))… and the instruction-manual left no questions open. He keeps his promises 100%, if he garanties you a delivery-week. And he is answering to every mail promptly and you can ask him a thousand questions and always get an enthuiastic and detailled explanation. He even asks you, if you would like him to make some prebuilding of the most delcate parts of the kit-version. Also Sophie, his office-companion, is so quick and friendly. Great team, great bulider, great sellers :)) 😉

I received the utmost care and attention from Sophie Tran for my order of the Crew Dragon model. She was professional, timely and even offered to help when I had trouble getting the stickers. Even more than this, she went the extra mile so that the order, which was for my son, had that little bit extra for him. I have since received the item, on-time and exceeds my expectations in terms of quality and aesthetics as well as accuracy. Thoroughly worth every penny and I highly recommend anyone to buy from Sophie and An Duong.

Excellent work Morethan3d! Keep it up!